I chose to research White Bear First Nations community. Four nations lived on the land including the Dakata, Nakota, Cree and Anishanabe with the traditional languages are

There is a cost for band membership, and this money goes back into the community to keep taxes low for all residents. The band owns and controls many different companies including White Bear Lake Resort and Bear Claw Casino. These companies help create economic development opportunities within White Bear itself.

The goal as a community is to educate the youth on their heritage, especially the language and ceremonies held within the community. There is very little information about different ceremonies and worldviews but they have been working towards healing for many years. Most of this healing is for residential school survivors but there are ceremonies that were held to educate those who were not directly affected by residential schools. Different ceremonies that have been held include treaty walks, pipe ceremonies and blanket exercises.

The yellow is a representation of Treaty 4 land and the small blue is part of a Manitoba treaty #2, meaning it is 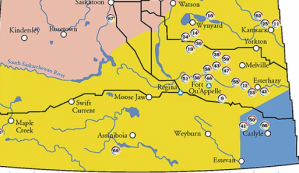 Saskatchewan borders but the treaty land is cut in half.

The surrounding areas around White Bear are predominantly European settlers, many with a racist small town mentality. Growing up I never heard positive stories about the people living in White Bear. For example, many were stereotyped as thieves and people who want to live off of the government’s money. As I work towards reconciliation I need to be aware of the stories that are being told and work to alter them so everyone is correctly portrayed. 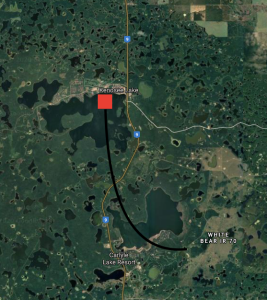 The red mark is were I would visit as a child and the black line shows how close it is to White Bear, a place I never new existed because there is so much separation between the two communities.

I am a white settler that grew up on treaty land without even being aware of it. I grew up visiting Kenosee Lake each summer without noticing a whole other community that lives down the road. I have opened my eyes to see the bias that is built about those who live in White Bear. I am a treaty partner meaning that I am able to live on this land because treaties were signed and it is my duty as a treaty partner to work towards reconciliation. This may be something simple as pointing out the racism that is shown in front of me or educating those about the issues that are happening within White Bear community. Being partners is a meaning that the two parties are equal, at this point this is not true and as a treaty partner I need to help create an equal field through decolonization and reconciliation.